Very few business owners are in it just for the money. Whether it’s the drive to pursue a passion, leave the corporate life behind, or find an alternative to retirement, the motivation required to overcome the challenges of entrepreneurship usually comes from somewhere other than the bottom line. However, most business owners also understand that focusing on profit is a necessity — it’s what makes it possible to pay employees, keep the lights on, and continue to grow the business.

To understand more about how profitability changes over a business’s lifetime and what factors have the largest impact on the bottom line, Guidant Financial launched our annual Small Business Trends survey in partnership with online lending marketplace LendingClub. Here’s what we learned from over 2,700 business owners about profitability across a business’s lifetime.

According to data from JP Morgan Chase, about a third of new businesses exit within their first two years after opening up shop. The trend of businesses that have been in existence longer having a better survival rate has stayed remarkably consistent over the last 20+ years. In other words, no matter what year over the last 20 years a business started, there’s the same likelihood of survival for how long the business has been operating.

Our study results showed told a similar story. Profitability for businesses from less than one year to three years in operation was significantly lower than businesses that have been around for four to seven, or over eight years. Business owners in the ten plus years group reported the highest percentage of profitability, at 87 percent.


This trend is true, even for some of the most valuable companies in the world. Amazon, now valued at around $797 billion was founded in 1994 and didn’t report a profitable quarter until the end of 2001.

Why is Profitability Important?

Businesses can keep their doors open through seasons of unprofitability — but to what point? Many companies go through phases of not making a profit for a variety of reasons, typically because of costs associated with debt and growth opportunities. But eventually a business needs to become profitable to survive.

We’ve all heard similar statistics about early-stage businesses facing greater challenges — even struggling to keep the doors open. It makes sense: new entrepreneurs face a steep learning curve, unforeseen expenses are costly to cover, and there are many other factors that impact new businesses. Despite the many challenges of becoming a new business owner, we were excited to see that over 50 percent of small businesses in operation for only one year or less reported profitability. 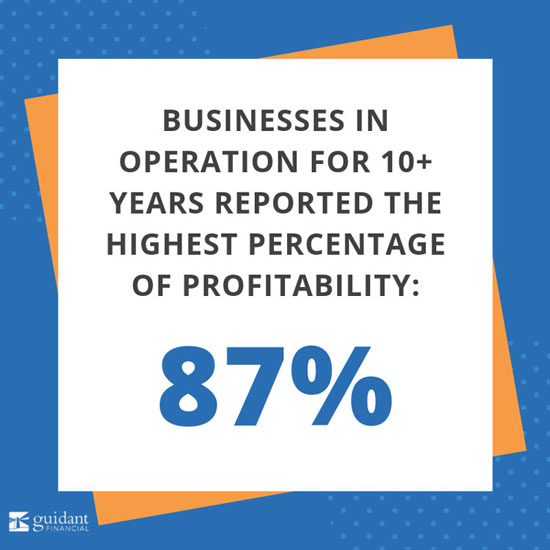 One of the biggest hurdles between new business ownership and profitability is the cost of capital. The way entrepreneurs fund their business venture has a long-lasting impact on their bottom line. Profit is measured by subtracting expenses from revenue, and a monthly financing payment is an expense. So the higher the interest rate on borrowed capital, the more challenging it becomes to reach profitability.

For example, take some typical repayment terms: someone who borrows $200,000 in the form a HELOC with a 20-year repayment at 7 percent would owe $775 a month. And if they utilized an unsecured loan with a 5-year repayment at 11%, they would owe $2174. Not only do these monthly payments make it harder to become profitable, but it’s also money that could be put back into the business. For young businesses that plan to utilize bootstrapping to grow the business, profit is essential.

Guidant clients who fund their business with Rollovers For Business Start-ups (ROBS), which are not a loan, are 63 percent more likely to succeed than business owners who use traditional financing methods. The survey showed this trend of building a profitable business while avoiding monthly payments was true of other less traditional funding sources as well. Eighty-three percent of business owners who utilized crowdfunding for sourcing capital reported their business as profitable.

Our survey revealed that companies with a few more years of experience are significantly more profitable than early-stage businesses. Of the business owners surveyed who have been in operation for four to seven years, 72 percent reported currently running a profitable business. Within that group, 62 percent of business owners four to five years in operation reported profitability compared to 87 percent for those with six to seven years of experience.

Business owners who have made it past the first couple years typically face different challenges than those who have been operating for less than four years. As an advantage, many of these companies have either found affordable financing or have found a manageable way to make their monthly payments. But a new challenge they face is deciding which growth opportunities to pursue and at what cost.

Try our prequalification tool to learn what forms of financing and how much funding you can access.

If bootstrapping for growth is no longer an option, it’s often at this point that companies look to raise additional capital. However, there are also ways to increase cash flow without taking on additional loans. Increasing prices is a tough decision, but it may be a necessary one for companies that aren’t profitable and whose gross margins aren’t meeting industry average. Some companies choose to initially attract customers by setting their prices lower than competitors (which can also negatively affect early-stage profits), but this usually isn’t sustainable. Raising prices can be healthy for the bottom line, but it’s not always simple.

It’s typically easier for companies in the B2B space to raise prices without losing customers than in the B2C industries. When businesses raise prices to increase profit, they can approach it a few different ways. It’s not uncommon for B2B companies to raise prices during contract renewals. But both B2C and B2B companies are most successful at retaining customers when crafting a clear value proposition, create a clear communication plan, and have an action plan to help unhappy customers.

Companies Operating for Over 8 Years are Primed for Profitability

Once businesses have made it past the ups and downs of the start-up stage or even the first several years of taking over an existing business or new franchise, it’s much more likely that they are profitable. Seventy-eight percent of respondents who have been in business for 8 to 10+ years reported that their businesses are currently profitable — making this group more profitable than any other surveyed. 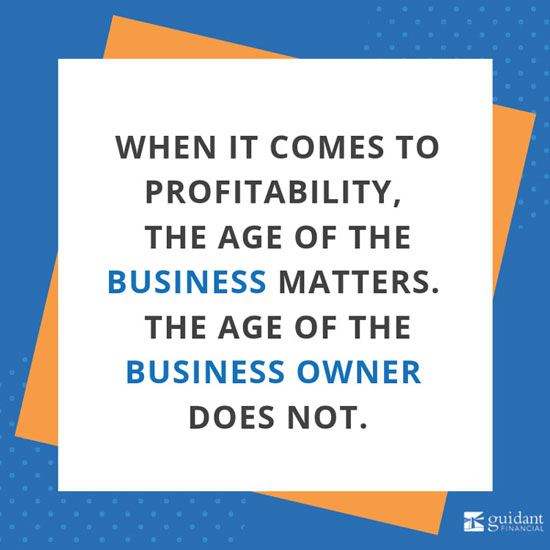 Once a business has been operating for several years, there’s a good chance they’ve repaid any loans that were initially borrowed or capital (or they’re close to paying them off), so more money is going toward growing the business and increasing profitability. They also likely have a reliable pricing structure in place and have reduced overhead by optimizing the number of people on staff.

Even businesses that are in healthy financial positions can look for areas to expedite operations and reduce expenses. For example, if an established business has not invested in a payroll service, there are significant advantages to making the switch even if there’s some change management involved. Utilizing a payroll provider like ADP or Paychex not only means accurate payroll and reporting for employers and employees, but these services typically come with a bevy of other benefits like job posting platforms and employee handbook guidelines — all tools that business owners need at any stage.

Profits May Vary by Type of Business

This trend of higher rates of profitability later in business’s lifetime stays consistent across different types of businesses. Ninety percent of franchise business owners and 86 percent of independent business owners with eight or more years of experience reported they are currently profitable.

Gross profit margins vary by industry. The results of our survey showed the home services, cleaning and maintenance, automotive, and business services industries reported the highest rates of profitability at 85 percent of business owners in each category reporting profitability. These results were for all kinds of businesses, including franchises, new start-ups, and existing businesses. According to data from Sageworks/Abrigo, reported by Forbes, specific industries have performed better than others when looking only at franchises. For 2017, real estate offices and brokers, hotels and motels, and full-service restaurants had the highest net profit margins as of 2017. It’s important to keep in mind that location and economy both play a large factor regarding how different types of businesses perform.

No matter how many years a company has been in operation, there are always steps business owners can take to make profit a priority. From finding affordable financing that carries a low cost of capital, reducing overhead, and making smart investments in products and services that help to run the business, there are many ways to improve profits.

And if you want to get your business off on the right foot, consider Rollovers for Business Start-ups, a form of small business financing that lets you utilize your retirement funds without tax penalties to get started debt-free and cash-rich.

PrevPreviousHow to Start a Cleaning Business
NextWhat’s A Business Entity?Next

Want to Use ROBS to Start a Business?

Our step-by-step Guide to Rollovers for Business Startups is a complete handbook of everything you need to know about using ROBS to start or buy a small business or franchise.

Discover Rollovers as Business Startups to start your business debt free.
Get My ROBS Guide

ROBS 401k business financing has increased in popularity for business owners. Despite having “401k” in the name, you can use most retirement plans for ROBS!

What Retirement Plans Work With ROBS?

Rollovers as Business Startups is a great way to fund your business debt-free. Learn what retirement accounts are eligible, and why.

Using ROBS to Fund Your Small Business While Keeping Your Job

There’s a better way to access your retirement funds to start or buy a business without triggering penalties. There’s even an option to use your current retirement funds as business capital without having to give your two weeks’ notice.

Your Rollovers for Business Startups (ROBS) and SBA Loan Timeline

Rollovers for Business Start-ups (ROBS) is a complex transaction that includes forming your own C Corporation, rolling your retirement funds into a new 401(k) plan, and using that plan to

No more questions about ROBS? Great! Let’s get the process started today!