We’ve taken a comprehensive look at the results of our State of Small Business survey to find insights regarding industry trends, changes, and patterns to franchised businesses across America. 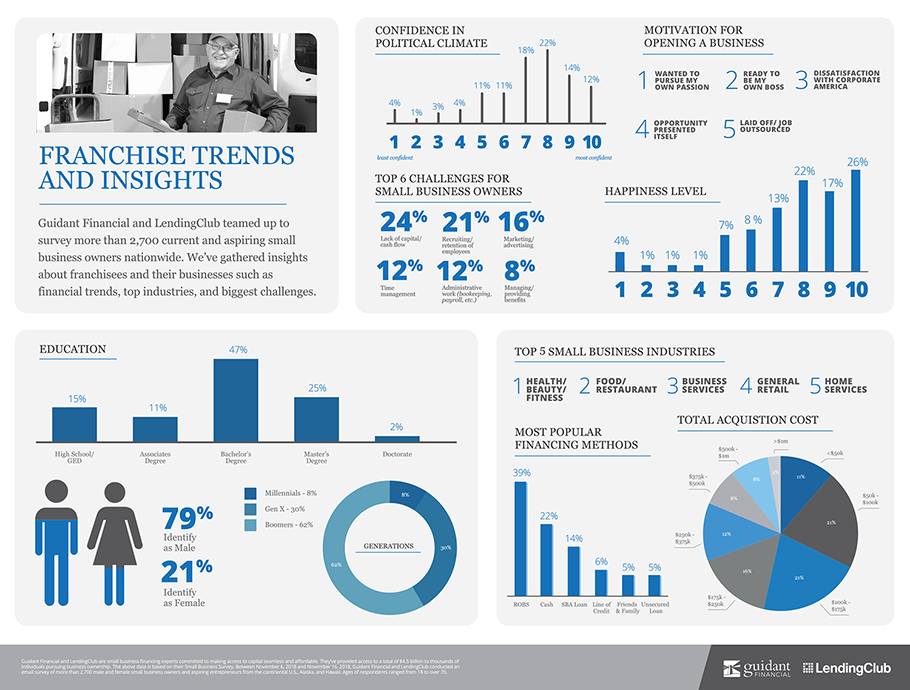 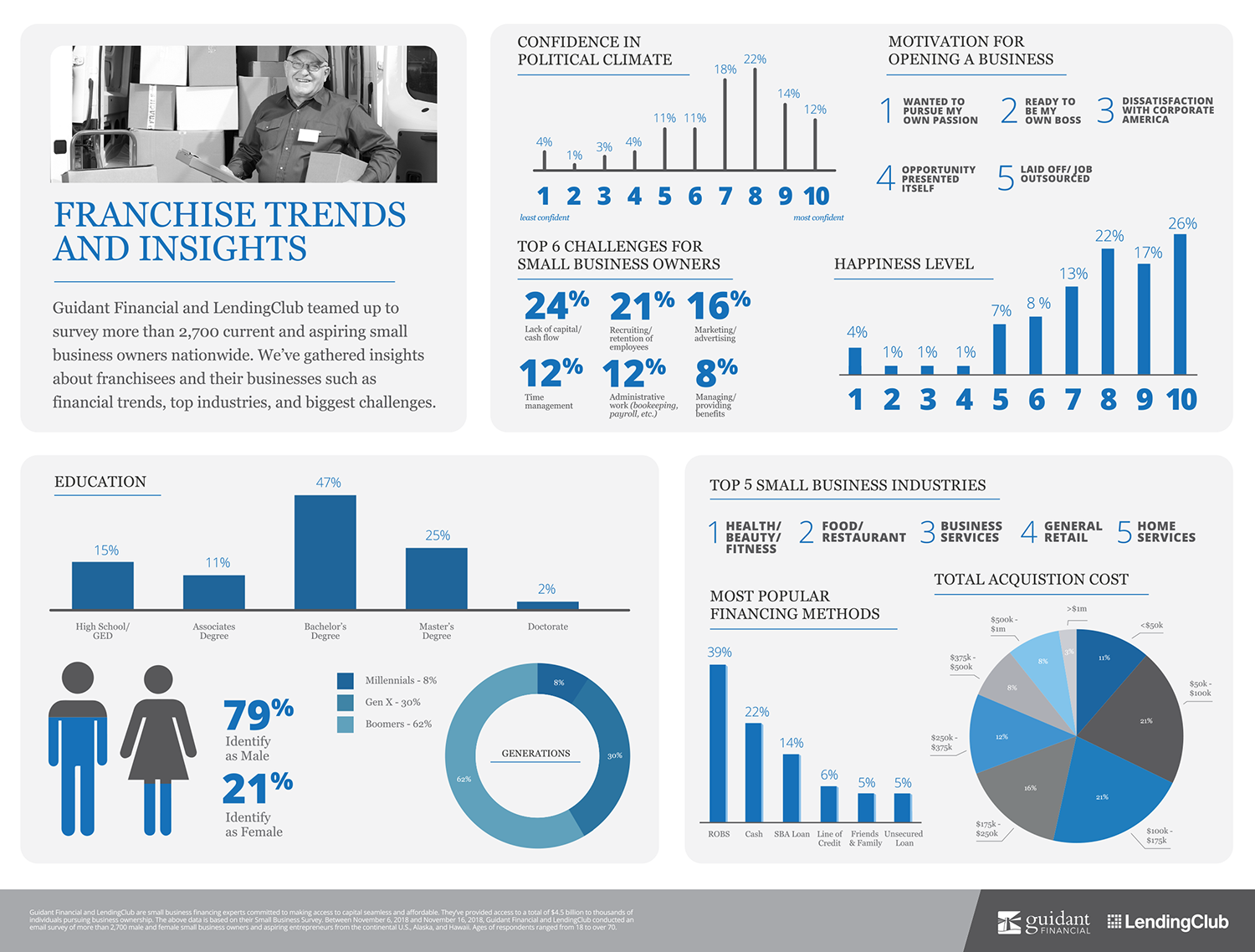 Who are Franchise Owners? 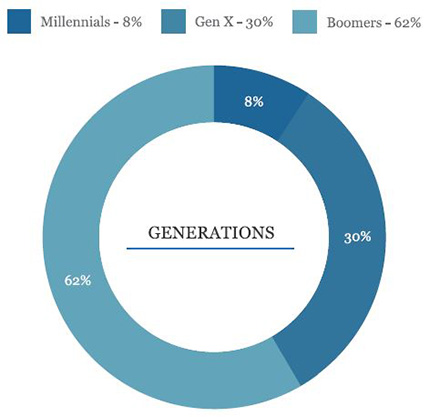 Franchises are primarily owned by “baby boomer” entrepreneurs, with 62 percent of franchises owned by this generation. Gen X owners hold 30 percent of franchises, while very few millennials have purchased franchises, at only eight percent. An important part of a franchise purchase is the support that comes with franchise ownership – between predetermined layouts, marketing materials, training, and more, the “all-in-one” package is more appealing to those buying a business later in life who might not be looking to innovate from scratch, but instead steadily support themselves to or even through retirement. 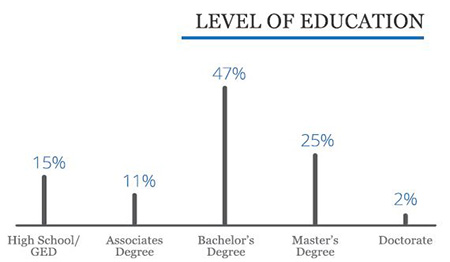 Life of a Franchise

Franchises can be found in just about every industry, but some are more popular than others. Our survey found the most popular franchise industry is health, beauty, and fitness, following a trend across all small businesses. The next most popular survey result is food and restaurant franchises, followed by business services. General retail and home services round out the top five.

While most franchises do employ two to five people, there was a 23 percent growth in sole operators from the previous year. This could potentially be due to the rising cost of business, as well as the tight labor market, making it challenging for small businesses to compete for top talent. When asked about their top challenges in the previous year, 14 percent more franchise business owners reported difficulties with recruiting and retention of staff.

While talent recruiting and retention did grow from year to year, it is only the second biggest challenge for franchises, at 21 percent. The biggest challenge remains the same from the prior year: lack of cash flow (24 percent). Other top struggles include marketing and advertising (16 percent), administrative work like bookkeeping or payroll (12 percent), and time management (12 percent).

Outsourcing services to professionals or organizations can serve as a powerful tool to save franchises time, adhere to best practices, and assist with time management. Twenty-six percent of franchises outsource tax preparation, making it the most popular business need to outsource. Following tax preparation, payroll (21 percent), CPA services (19 percent), credit cards (12 percent), and bookkeeping (10 percent) are the most popular needs outsourced. Bookkeeping, which can often be a complex and time-consuming task, was outsourced 32 percent more this year than last.

When asked what they would do with additional capital, the biggest desire of franchise owners was expansion. Following expansion, other top wants were marketing and advertising, staff, equipment, and administration work. A desire to invest more money into staff grew 16 percent year over year, possibly due to the struggle of recruiting and retaining talent as seen when franchise owners were asked about their biggest challenges.

Another testament to the rising cost of doing business was a 22 percent decrease in franchises acquired for under $100,000. The majority of franchises were acquired for over $100,000, at 68 percent, a 15 percent increase from the prior year.

Profitability of franchises grew nine percent year over year. The majority of franchisees surveyed are profitable, at 66 percent. Perhaps due to this growth in profitability, there was also 17 percent growth in franchise owners who wished to open an additional location, at 23 percent. However, 57 percent of owners are more focused on growing their current location. Only eight percent are interested in selling their franchise at this time.

The most popular form of financing for franchises is Rollovers for Business Start-ups, a funding method that allows small business owners to draw financing from their retirement funds without tax penalties. As most of the franchise owner subset surveyed are currently Guidant Financial clients, by nature they have chosen ROBS.

Thanks to consistent growth of dollar output, establishment, and employment and owners hungry to grow their businesses, franchises are a vital, strong piece of the American economy. An excellent choice for aspiring entrepreneurs who aren’t interested in rebuilding the wheel, franchises are a dependable option for those looking to follow their dreams of small business ownership.