Entrepreneurship
News and Media
Small Business
The 2020 presidential election is one of the most divisive and historic elections in modern history. With small business reeling due to the impact of the COVID pandemic, many are asking what the future holds for small businesses after the election. Will either candidate make life easier for small business? Will one party offer better solutions? Is the continuity of power better for business rather than a transition of power? We’re setting out to demonstrate that both parties have positive benefits for small business and that small business is resilient and endures – despite 2020’s hardships.

Which Candidate is Better for Small Business?

The presidential impact on the US and the global economy is often greatly embellished. For example, take the top two presidents ranked for job creation, Democrat Bill Clinton and Republican Ronald Reagan (2). This ranking doesn’t consider the president with the highest number of jobs created: Franklin Roosevelt. FDR increased jobs by 21.5 percent but also served three terms (3).

Both Clinton and Reagan are praised for how many jobs they created, but they also were at work during a period of significant job creation due to broader social change: millions of women entering the workforce (4). While policies certainly helped more women get jobs or better jobs than they had before, neither president single-handedly created the trend.

What does the data say? On average, Democratic presidents grew the economy 4.4 percent each year, while Republicans grew it 2.5 percent (5). However, a Hudson Institute study showed that the six years of best economic growth were evenly split between Republican and Democrat presidents. The average annual GDP growth was 2.5 percent during both Obama’s second term and Trump’s presidency through 2019 (6).

Tailored Funding Options for You

Pre-COVID, job growth had remained notably consistent since the end of the Great Recession in 2010. Wages have inched up at a steady – but slow – pace. Until the pandemic, unemployment had steadily declined. And the 3.6 million jobs added in Trump’s first 19 months in office compares roughly to the 3.9 jobs added in the previous 19-month period under Obama. So, while economic growth began during the Obama administration; until the unexpected pandemic struck, the Trump administration sustained roughly the same upward path (7).

The next president will likely have the most significant impact on small business primarily through COVID-relief programs. Otherwise, each candidate recognizes the importance of small business on the American economy and will work hard to support it. While each candidate has their own thoughts on how to do this best, it’s really market forces, which party controls Congress, and the timing of a coronavirus vaccine that will probably be what forms the future for small business. However, American small businesses have proven their resilience time and time again.

When lenders tightened their loan policies in the wake of the 2008 financial crisis, small business owners searched for alternative funding methods. New businesses leaped to fill the need and technology gap for alternative methods, increasing the accessibility of start-up financing and growth capital funding. This lead to the birth of marketplace lending (8) and the still-increasing popularity of equity-funding like Rollovers for Business Start-ups (9). In 2016, 21 percent of small businesses sought out online lenders, growing to 24 percent in 2017. (10)

SBA loans have also been steadily increasing in use, allowing small business owners funding opportunities they may not have had pre-Recession. SBA Administrator Maria Contreras-Sweet testified before the House Small Business Committee on January 7, 2016. She reported that during the 2015 fiscal year, the SBA reached historic levels of lending.

“We reached $23.5 billion in gross approvals, a 22 percent increase in the number of loan approvals, and a 23 percent increase in the dollar value of those loans, compared to FY14,” Contreras-Sweet said. “It’s not just the overall numbers that were up. We were able to target businesses with the greatest difficulty accessing capital. The dollar value of our 7(a) loans was up 22 percent to women, 23 percent to minorities, and 103 percent to veterans.” (11)

Until the financial crisis of 2008, small business accounted for about 45 percent of employment (12). However, just about ten years after the crisis, small businesses created 62 percent of brand-new American jobs (13).

What Will Happen to Small Business if Trump Wins?

Trump passed major tax law changes in 2017, which lowered the corporate rate to 21 percent for C corporations, which caused more businesses to restructure as C corporations, taking advantage of the change. Some key provisions in Trump’s tax changes expire in 2025, including the 199A deduction that allows a 20 percent qualified business income deduction from the taxes for those who get income from pass-through businesses (like sole proprietorships, corporations, and partnerships) (14). Trump would likely work on making these provisions permanent during his second term.

Trump has already signed a directive that allows employers to voluntarily defer payroll taxes through the end of 2020 (15). He has indicated that he’ll push to extend the deferral’s repayment period or even eliminate federal payroll taxes entirely if he wins the 2020 election. However, as payroll taxes fund Social Security and Medicare, he faces opposition both from inside and outside his own party. He’s also discussed lowering the top capital gains tax rate from 20 percent to 15 percent – which could be a positive change for small business owners looking to exit their businesses. Major long-term or permanent tax changes fall entirely to Congress, so Trump alone can’t abolish payroll taxes. However, as the Republican party leader, his initiatives will undoubtedly affect policymaking (16).

When it comes to small business recovery from the COVID pandemic, Trump highlights the Paycheck Protection Program (PPP) created as part of the CARES Act. He supports reopening the PPP with $135 billion in funding, which roughly matches the unused funds left in the program when it closed in August. The demand for PPP loans lessened as both lenders and small businesses struggled with frequently changing guidelines (17) and a lack of information on a path to loan forgiveness.

What Will Happen to Small Business if Biden Wins?

Partisan politics have profoundly influenced the speed of COVID recovery efforts. The CARES bill took nearly three months to pass and be signed into law (18). Six months later, a second recovery effort has yet to come as of the time of publishing. Both parties disagree on how much money should go into recovery efforts and how that money should be used. Before the election, the US House of Representatives is majority Democrat, while the US Senate is majority Republican, with the Republicans holding the White House. With politics increasing divisive and partisan arguments going strong, it’s been challenging for the government to come together on solutions that benefit small business survival and recovery in the face of the pandemic and its resulting recession.

Democrats can flip the Senate in the 2020 election. With Democrats in control of both Congress and the White House, partisan politics may be less of a block for relief efforts, as majority control makes passing bills easier. If this happens, small business owners can likely expect quick movement on recovery efforts with significant government spending.

Some notable steps to recovery that Biden has proposed include (19):

Beyond COVID relief, Biden’s business tax plan involves raising the corporate tax rate from 21 percent up to 28 percent, lower than the 35 percent rate before Trump’s 2017 tax cuts. His tax plan also supports Social Security with a 12.4 percent Old-Age, Survivors, and Disability Insurance payroll tax on income earned above $400,000. This tax would be evenly split between employers and employees. This creates a hole where wages between $137,700 (the current wage cap), and $400,000 aren’t taxed. However, the hole would gradually close over time as the wage cap adjusts for wage growth and the threshold stays fixed. When the hole eventually closes, all wages would be taxed at 12.4 percent for Social Security payroll tax (22), to create a more sustainable Social Security program.

The bottom line is that small business has always been the backbone of the American economy. Even when times have been historically challenging or completely unprecedented, small business endures, survives, and grows to thrive again.

Ready to start your own business?

Not sure where to start? 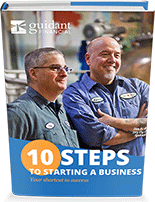