A look at Women-owned businesses in 2021

We asked current and aspiring women business owners to share what their businesses look like, how they responded to the COVID-19 pandemic, and more. Here is a look at how 2020 affected women-owned small businesses in America and what they expect in 2021. 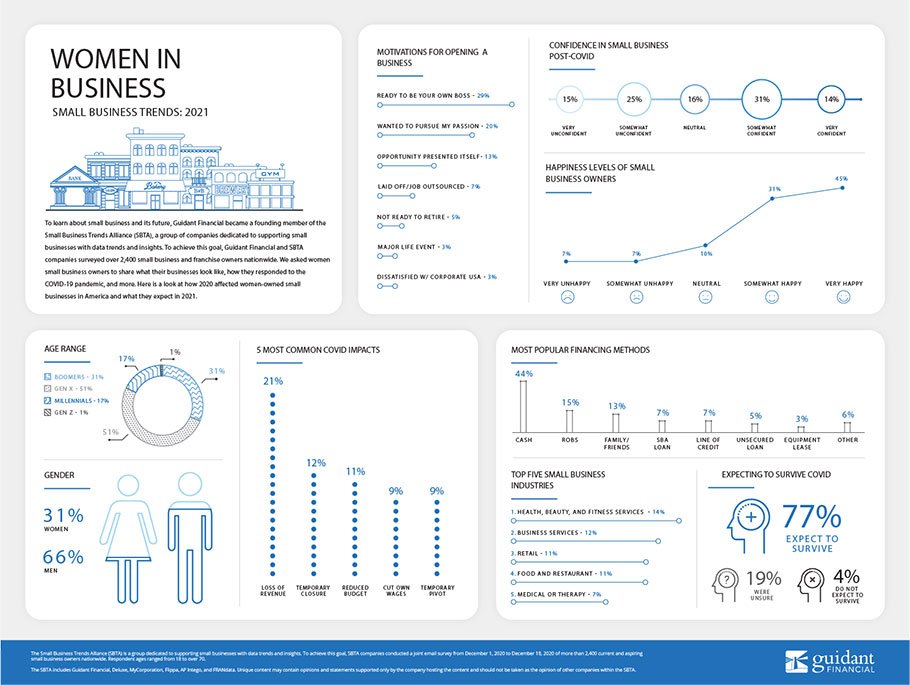 They are also highly educated: the largest share at 34 percent holds a Bachelor’s degree, while 27 percent have a Master’s and eight percent a Doctorate. 11 percent of respondents have an Associate’s degree and 20 percent a high school diploma or GED.

The reasons these women became business owners are varied, but the plurality of 29 percent said they were ready to be their own boss. The next-most common response at 20 percent was a desire to pursue their passion, followed by a dissatisfaction with corporate America and the presentation of an opportunity, each with 13 percent.

The large majority of women business owners employ at least one person other than themselves: 46 percent employ two to five people, while another 19 percent of women-owned businesses have between 6 and 10 employees. Fourteen percent of respondents employ between 11 and 50+ employees, and the business owner is the only employee in the remaining 20 percent.

The number of people employed by women-owned businesses is increasing: last year’s Small Business Trends survey saw 32 percent of owners were the only employee, and the two to five range has also increased year-over-year by 23 percent. Not only that, but 58 percent of women-owned businesses were profitable. Profitability is down 18 percent from the prior year, though this is no surprise given the upheaval of 2020.

The top challenges women business owners faced in the last year were marketing and advertising with 24 percent of the share, lack of capital / cashflow at 17 percent, and recruiting/retaining employees at 15 percent. Other common challenges included managing/providing benefits (14 percent), administrative work (13), and time management (nine).

To help lighten the load, women business owners have plans to outsource some business services to another professional or organization in 2021. Twenty-five percent of respondents will outsource tax preparation, 19 percent payroll, and 17 percent CPA services. Other common responses included bookkeeping, IT support, and marketing/advertising.

2020 proved to be a wild ride in business and politics alike. When asked which party best represented their own political views, 33 percent of women business owners answered Democrat and 24 percent Republican. Seven percent answered either Libertarian, Green, or other. But a stunning 36 percent – over one third of all respondents – said they do not belong to or feel represented by any political party.

Despite feeling politically unmoored, 55 percent of women business owners voted for Joe Biden in the 2020 presidential election, while just over a quarter (27 percent) voted for Donald Trump. The remaining 18 percent wrote in, voted for other candidates (like Libertarian Jo Jorgensen) or abstained from voting entirely.

Instead, they’re getting creative: nine percent of women business owners pivoted to a socially distant business model or changed their goods or services. Twelve percent of respondents reported a positive effect during the pandemic, including increased revenue, expanded business, hiring more employees, and increased wages. An additional four percent said COVID has had no significant effect on their business.

Despite the challenges they’ve faced throughout 2020, a full 77 percent of women business owners expect their business to survive through the COVID-19 pandemic.

Read more about how COVID has affected small businesses across the country in our 2021 COVID-19 Small Business Trends report.

What Comes Next for Women-Owned Small Businesses

Things are looking up for women-owned businesses in 2021: nearly half of women business owners plan to grow their current location, while a third will sustain it. Nine percent plan to sell and eight percent will open a second location.

They also have big plans to invest. In a question where respondents could select as many options as applied to them, 83 percent said they plan to invest in digital and/or traditional marketing, 44 percent will expand or remodel their business, and 43 percent intend to increase their staff. Other common selections include investing in business services technology (21 percent) and technology for digital signage, touch-free ordering, etc. (14 percent).